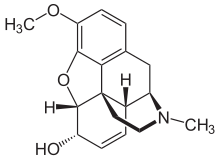 Codeine is an opiate used to treat pain, as a cough medicine, and for diarrhea. It is typically used to treat mild to moderate degrees of pain. Greater benefit may occur when combined with paracetamol (acetaminophen) or a nonsteroidal anti-inflammatory drug (NSAID) such as aspirin or ibuprofen.

Binds to opiate receptors and blocks ascending pain pathways; reduces patient’s perception of pain without altering cause of the pain.

Food: May be taken with food to lessen GI upset.

Pregnancy: Category C. Category D if prolonged use or if given in high doses at term.

Contraindications: Hypersensitivity to narcotics of the same chemical class.

> Administer drug before patient experiences severe pain for fullest efficacy of the drug.

> Have the following available when treating patient with this drug: naloxone (Narcan) or other antagonist, means of administering oxygen, and support of respiration.

> Nausea, vomiting, and orthostatic hypotension occur most prominently in ambulatory patients. If nausea and vomiting persist, it may be necessary to administer an antiemetic, eg, droperidol or prochlorperazine.

> This drug can cause severe hypotension in a patient who is volume depleted or if given along with aphenothiazine or general anesthesia.

> Careful diagnosis must be made of acute abdominal condition before this drug is administered.

> Respiratory status prior to and following drug administration. Note rate, depth, and rhythm of respirations. If rate falls below 12/min, withhold drug unless patient is receiving ventilatory support. Consider administering an antagonist, eg, naloxone 0.1-0.5 mg IV every 2-3 minutes. Be aware that respiratory depression may occur even at small doses. Restlessness may also be a symptom of hypoxia.

> Character of cough reflex. Encourage postoperative patient to change position frequently (at least every 2 hours), breathe deeply, and cough at regular intervals, unless coughing is con¬traindicated. These steps will help prevent atelectasis.

> BP. If systolic pressure falls below 90 mm Hg, do not administer the drag unless there is ventilatory support. Be aware that the elderly and those receiving drags with hypotensive properties are most susceptible to sharp fall in BP.

> Respiratory status of newborn baby and possible withdrawal reaction. If the mother has received an opiate just prior to delivery, the neonate may experience severe respiratory depression. Resuscitation may be necessary as may a narcotic antgonist, eg, Narcan. Alternatively, the neonate may experience severe withdrawal symptoms 1-4 days after birth. In such circum¬stances, administer tincture of opium or paregoric.

> Signs and symptoms of constipation. If patient is on drag longer than 2-3 days, administer a laxative.

> Avoid alcohol and other CNS depressants such as sedatives (eg, diazepam) when taking this drug.

> Avoid driving and other activities requiring mental alertness or that are potentially dangerous until response to drug is known.

> Change position slowly, in particular from recumbent to up-right, to minimize orthostatic hypotension. Sit at the edge of the bed for several minutes before standing, and he down if feeling faint or dizzy. Avoid hot showers or baths and standing for long period. Male patients should sit on the toilet while urinating rather than standing.

> Do not increase dose if you are not experiencing sufficient pain relief without approval from treating physician.

> Do not stop medication abruptly when you have been taking it for >2 weeks. If so, a withdrawal reaction may occur within 24—48 hours. The following are typical symptoms: irritability, perspiration, rhinorrhea, lacrimation, dilated pupil, piloerection (“goose flesh”), bone and muscle aches, restless sleep (“yen”), increased systolic pressure, hyperpyrexia, diarrhea, hyperglycemia, spontaneous orgasm.

> Do not take OTC drugs without approval by treating physician. Some of these may potentiate the CNS depressant effects of the drug.

> Attempt to void every 4 hours.

> The following considerations should be made in the event of pain or in unusual circumstances, eg, breakthrough pain: use a sustained release Codeine preparation along with one that provides rapid release. Transdermal therapy may be beneficial.

> Administer the drag IV or IM and switch to oral therapy once pain is controlled. Transdermal therapy may be beneficial.