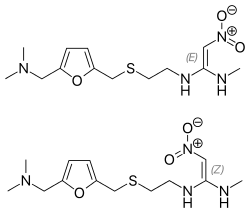 Ranitidine is a medication which decreases stomach acid production. It is commonly used in treatment of peptic ulcer disease, gastroesophageal reflux disease, and Zollinger Ellison syndrome. There is also tentative evidence of benefit for hives

Pediatric: Safety and efficacy have not been established.

> Use with caution in the elderly, in patients with hepatic or liver disease, and in immunocompromised patients.

> Symptomatic rehef does not mean absence of gastric malignancy.

> Adverse reactions are most likely to occur in elderly and in patients who have impaired renal function.

> Avoid driving and other activities requiring mental alertness or that are potentially dangerous until response to drug is known.

> Discontinue drug for 24-72 hours before performing skin test for allergens.

> Presence of Helicobacter pylori. This is a standard approach in patients with peptic ulcer disease.

> Use endoscopy to prove healing of gastric ulcers. A nonhealing gastric ulcer may actually be due to gastric cancer.

> Continue taking drug even after reduction in ulcer pain.

> Report ongoing use of OTC H2 blockers to your physician.

> H2 blockers are the drugs of choice for the following conditions: dyspepsia not evaluated by endoscopy (empirical), mild to moderate GERD, peptic ulcer disease not due to H. pylori infection.