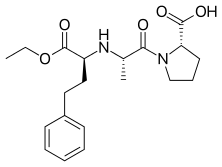 Enalapril is a medication used to treat high blood pressure, diabetic kidney disease, and heart failure. For heart failure it is generally used with a diuretic such as furosemide. It is given by mouth or injection into a vein.

Routes of Administration: Oral and IV.

Pediatric: Safety and efficacy have not been established.

Food: Administer without regard to meals.

> ACE inhibitors have been associated with anaphylaxis and angioedema.

> Use extreme caution in combination with potassium-sparing diuretics (high risk of hyperkalemia).

> During surgery/anesthesia, the drug may increase hypotension. Volume expansion may be required.

> There may be a profound drop in BP after the first dose is taken. Close medical supervision is necessary once therapy is begun.

> Electrolytes, CBC with differential and platelets, BUN and creatinine.

> Signs and symptoms of angioedema: swelling of face, lips, tongue, extremities, glottis, larynx. Observe in particular for obstruction of airway, difficulty in breathing. If symptoms are not relieved by an antihistamine, discontinue drug.

> Signs of persistent, nonproductive cough; this may be drug induced.

> Changes in weight in patients with CHF. Gain of more than 2 kg/wk may indicate development of edema.

> Signs and symptoms of infection.

> Signs and symptoms of renal toxicity.

> Do not use salt substitutes containing potassium.

> Use two forms of birth control including hormonal and barrier methods.

> Avoid NSAIDs; may be present in OTC preparations.

> ACE inhibitors have been associated with an autoimmune type symptom complex including fever, positive antinuclear antibody, myositis, vasculitis, and arthritis.

> Typically twice-a-day administration is favorable but it may be used once daily even at higher doses.

> The ACE inhibitors have been highly efficacious and well tolerated class of drug. Nearly every large randomized clinical trial examining their use has been favorable. First, the Consensus Trial proved that enalapril decreased mortality and increased quality of life in Class II and HI CHF patients. Then the Solve trial and others proved their benefits in remodeling myocardium post MI. The DCCT trial of diabetic patients demonstrated the ability of ACE inhibitors to decrease the small vessel damage to retinas and glomeruli. Clinical trials looking into primary prevention of cardiac effects are ongoing. Treatment with this class of drug is the gold standard in patients with left ventricular systolic dysfunction. The two most common adverse effects of ACE inhibitors are cough and angioedema. Transient and persistent rises in antinuclear antibodies have been noted. As this class of drug is a vasodilator, orthostasis is another potential problem.